Inventor hammers out a de-mining machine


Inventor hammers out a de-mining machine 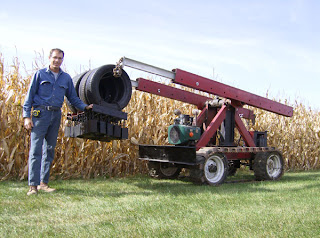 Gary Christ poses alongside his homemade de-mining machine, The Peace Hammer, on his farm in Illinois.

FOUR years of work on a homemade de-mining machine has paid off for “part time” Siem Reap expat and US inventor Gary Christ, with a new version of his apparatus shipping out from Chicago next month bound for Phnom Penh, where it will undergo field testing aimed at securing funding to roll out the machine nationwide.

Christ, who dubbed the machine “The Peace Hammer”, based on the way it pounds the ground with reinforced steel weights at up to 10 times the force of a human footstep, told 7Days the new version of his machine, which he first tested in Siem Reap, incorporates feedback received from the government-run Cambodian Mine Action Centre during its first round of trials in 2007.

“CMAC said they need something extremely manoeuvrable so I upgraded the machine with remote-controlled steering and lifted it onto caterpillar tracks to make it bi-directional. They like the idea and they’ve been extremely supportive of the new version.”

Cobbled together on Christ’s Illinois farm out of donated scrap metal and tractor parts, the inventor explained his machine works by using a hydraulic crane to lift steel weights at the front of the vehicle and drop them like hammers on top of suspected mines.

“The arm of the machine lifts the weights with hydraulics and holds it in suspension before it’s released remotely. Once the hammer hits the ground without detonating anything, it’s safe to walk on.”

The hammer mechanism, which is suspended from the front of the vehicle, is ringed with tyres which act as shock absorbers to diffuse the explosive force of any mines the machine destroys.

“Most anti-personnel mines contain around 200 grams of TNT. Once the hammer hits one and it explodes, this force is absorbed by the layers of tires cushioning the hammer. If it’s a larger mine and you need more impact you just lift the weights a little higher before dropping them.”

Christ explained his machine is able to travel across more difficult terrain than older de-mining vehicles which use a “flail” technique to whip the ground in front of the machine with chains.

“With a flail-based machine if it’s a heavily wooded or rocky area you’re out of luck, if you use the chains they’ll be caught on the all obstacles. My machine is more manoeuvrable and able to get into areas you couldn’t otherwise.”

After Christ’s machine arrives in Phnom Penh, it will have additional equipment installed, a bigger motor fitted, and undergo testing at the headquarters of de-mining machine manufacturer Development Technology Workshops before field trials scheduled for September.

Christ, who has been a regular visitor to Cambodia since 2001, said the idea of building a de-mining machine first occurred to him through his work with the Angkor Association for the Disabled in Siem Reap, and his ultimate goal is to see landmine victims using his device.

“The biggest reason I’m doing this is to employ people with disabilities in a job that will make Cambodia safer and give them the satisfaction of getting rid of landmines so they don’t hurt anyone else. After all, who knows more poignantly about what a landmine can do than someone who’s stepped on one?”

While the prototype cost only $2500 to build out of recycled and donated materials, Christ estimates the price of mass producing his de-mining machine will be around $50,000.

He said: “The next step is to contact de-mining organisations to hopefully get a contract to manufacture some for their use.”
SOURCE: http://khmernz.blogspot.com/2011/04/inventor-hammers-out-de-mining-machine.html
Posted by Unknown at 11:30 PM